NATASHA THE FOOTBALLER
Season 2017/18 Summary
What a cracker!!! 🤩And thankyou everyone at UE Cabrera (Staff, Coaches, Parents and Players) for one of the most enjoyable football seasons we have experienced.

The pre-season began with several (4) offers from clubs wanting Natasha to play for them and a journey back to Australia for Natasha to go into training camp with the Australian U17 team. She came away from the camp absolutely buzzing with a very definite idea of the pathway she wanted to take and the type of footballer she wanted to become. On returning to Barcelona, Spain she accepted an invitation from UE Cabrera to play in their U19A team as they were about to embark on their first season in U19 first division. Natasha took on a leadership role due to her previous experience in first division and her level of football ability. She fought relentlessly to help Cabrera to achieve their objective and played a total of 52 games during the season averaging about 10km per game (80min) only missing 1 game due to a virus. She worked tirelessly on every aspect of her football both on and off the field and continued to make big improvements this season as well.

Natasha had an absolutely amazing season, so impressive was she that her coach told her that she had the best touch of any player he had ever coached in over 17 years of coaching and that she was like the legendary Andres Iniesta where her ball control was like she had the ball on a string. One of the highest compliments any midfield player could receive. Her ball control, running game, passing game, goal creation and scoring all continued to improve. Her technical football ability, athleticism and ability to run with the ball at her feet terrorized the opposition. Her strength showed in her ability to win so many difficult balls and to hold off defenders as she kept the ball at her feet while scanning the field for best options. She also developed her ability to control a game from her midfield position and to direct the team in order to get the best from them, all without losing focus on her own game.

She scored 13 goals which were often important goals, one being the only team goal in the Mic Cup Consolation Final, had at least 8 assists and had too many key passes to count. She travelled over 1,200km in total during training and games, lifted over 35 tonnes of weight with her gym training and in the last 4 seasons she has played 39, 42, 44 and 52 games respectively without a non-contact. Which is extremely impressive considering the collisions and the leg chops she receives in nearly every game.

Thankyou again to everyone at UE Cabrera for a fantastic and enjoyable season and watch this space for Natasha´s  plans for next season.
26/06/2018
Another game to finish the season as Natasha played with her likely team for the next season against a team from Colombia. Her new team looks to be a very composed football team who look to pass the ball at every opportunity and play some absolutely outstanding football at times. Natasha´s team were far too skilful and athletic for the Colombian team and dominated the game from start to finish eventually winning 2-0 but could have been 10-0.
Natasha had a very solid game in the midfield and while it was clear that she was taking it easier than when she plays her competition games she played very well and distributed the ball well. She also had 3 shots on goal, 2 just wide and a great header which was saved. Everything looks very positive for next season.
16/06/2018
Another tournament win and trophy to finish a long hard season for the Cabrera team. As the season draws to a close this Cabrera team played together for the last time in a local tournament in Barcelona and while all the team was clearly tired and far from playing their best football they did enough to win both games and the tournament and took home another trophy to finish the season on a high. 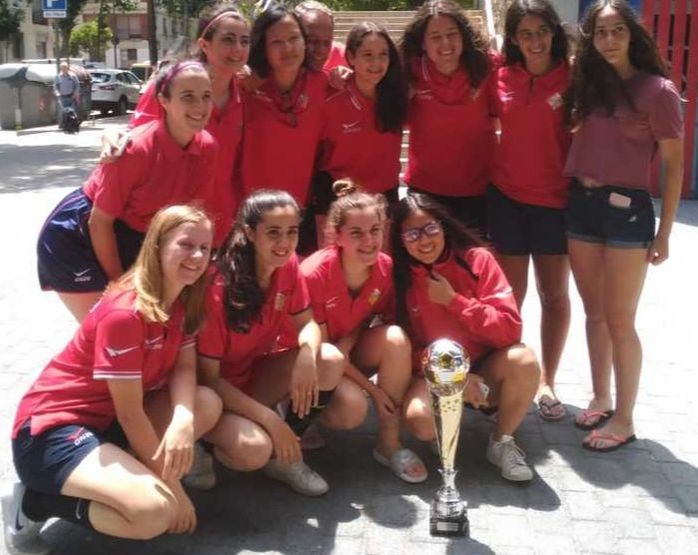 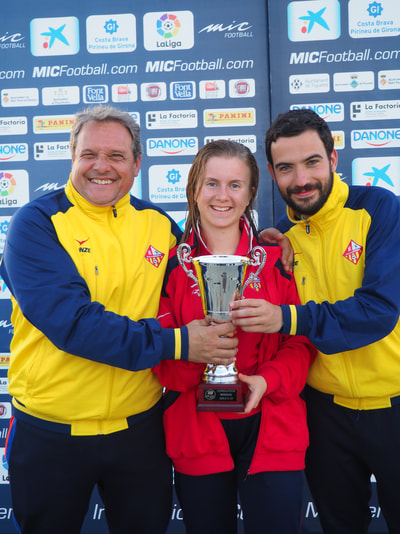 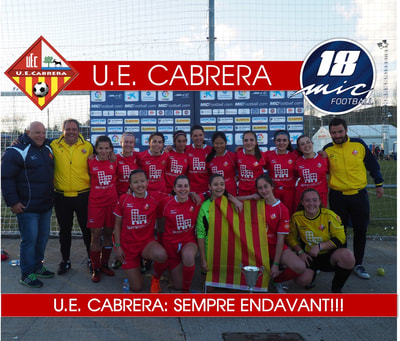 The Quarter Final match was against Louisiana Dynamo where Cabrera played their best football of the season with a controlled and composed passing game to comfortably win 3-0 and move into the Semi-Finals.

The Semi Final match was against an Andorra national team and while Cabrera didn´t maintain the high football standards of the quarter finals they did win comfortably at 2-0 and progressed to the final.

The Final match was against Cabanes and saw 2 extremely tired teams playing their sixth game of football in 4 days. While the football was not pretty, Cabrera went to the lead 1-0 behalf half-time only to let it slip to a 1-1 draw just before full-time which meant a penalty shoot out. After 8 penalty shots and 5 incredible saves by Alba the keeper, Paula slotted the winning penalty (4-3) for Cabrera to be crowned Mic Cup 2018 Consolation CHAMPIONS !!!😃😃😃

Natasha had a very strong tournament playing most of the minutes of all the games. She gave an extremely impressive performance against a classy Japanese team and while she was clearly tired by the final she worked tirelessly and scored a cracking left foot goal while surrounded by 5 defenders to take Cabrera into the lead in the final. ​She played about 280 minutes and ran over 35km in 4 days. A great effort and congratulations to all players, coaches, the directive and parents for a great result. . 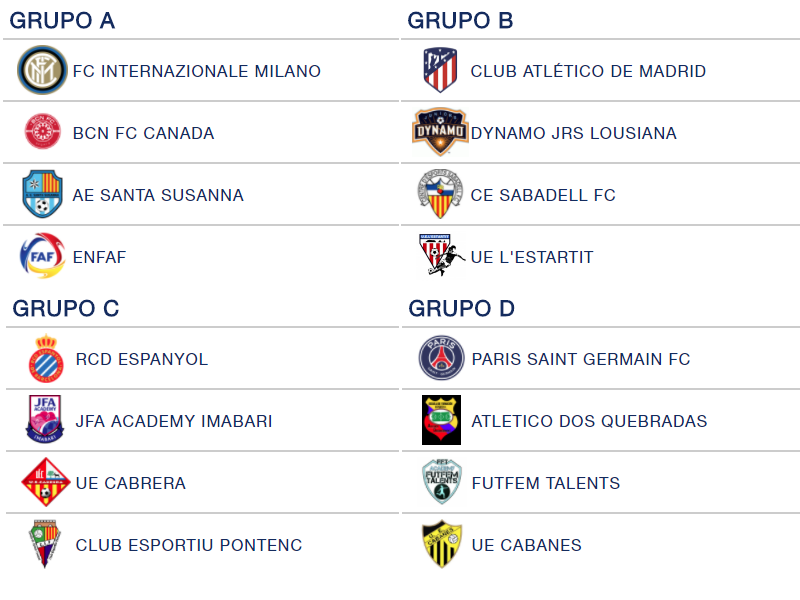 ​It is important for us to get this week correct because the competition begins on the approaching weekend and the first game will be one of the most difficult games of the season as Cabrera de Mar face a very strong Damm team.
Trial Number 2
v Cerdanyola - Natasha played her second friendly game with Cabrera de Mar and it was against Cerdanyola open women team. The game ended in a 2-2 draw but was somewhat disappointing as they played some absolutely outstanding football in training during the week but didn´t reproduce anywhere near the same level of football during the game. Hopefully they will get their game heads on soon and begin to play the outstanding football in the games that they have been displaying in training.
Natasha started this game for Cabrera de Mar and she was outstanding as she played a good quality of technical football and looked composed at all times. She also score the first Cabrera goal and assisted the second goal for a first class performance.
Trial Number 1
Natasha played her first friendly game with her new team Cabrera de Mar against a local open womens second division team called Martaro. While Mataro weren´t particularly strong Cabrera looked to play football continuously and showed lots of courage and skill in finishing comfortable winners 6-0. It was a very encouraging performance with a full team mentality to play football and some very strong football players in the team. They team should also improve significantly as they learn how each other play and develop more cohesion. It was a very positive start to season preparations.
Natasha came off the bench playing about 55 minutes and was very strong in displaying all facets of her game including some very good penetrating runs with the ball, quality ball wins, astute key passes and 3 shots on goal resulting in one goal. It was a very strong display from Natasha which should improve as she becomes familiar with how the team plays.
Team decided Season 2017/18
Natasha has decided to play the 2017/18 season with Cabrera de Mar in U19 first division in Barcelona, Spain. After a 1 month trial with Damm CF, a selective team who finished 2nd only to the mighty FC Barcelona last season, Natasha was told she was clearly at the level, which was obviously clear to everyone, but they had already signed 26 players in their squad which meant there was not any more room for another player. The objective for Natasha for this season is to play alot of game time in her favorite position of midfield and Cabrera de Mar have been super keen to sign her since they knew she was available. Cabrera have just been promoted to the U19 first division, have a group of tough spirited girls and a good senior coach where Natasha will get alot of game time and can help the team be competitive for this season
Season 2017/18 pre-season has started
The 2017/18 pre-season has started for Natasha. As she returned from the Australian U17 training camp she had only one day rest and was back in training as she continues her trial with Damm CF U19A team. She completed a solid week of training that saw her complete 2 games as well. In both games she played in the midfield and Damm won the first game 0-12 and the second 1-0. In the first game Natasha played very well in controlling the midfield to the point where the opposition coach put a player on specifically to mark her. In the second game she was not so dominant but still did many good things and was a solid contributor to the teams performance even creating a fantastic goal opportunity for the striker. The coming week will be another big week of training which includes 3 games on the weekend.